I’m from N.Y.C.
I’ve been playing locally since the late 1980’s.
Songs have been aired on WFMU and WNYC and have been featured in a handful of films.
Latest project “CRYSTAL ROBOTS” includes: Kevin Corrigan, Ahmed Kharem and Richard Martin
Thus far we have released 1 full length record and one 7 inch. Our 2nd 7inch is due out in spring 2019.

Buy Under The Veil Unseen 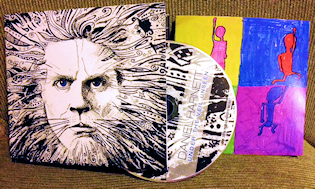